A few photos from our day releasing turtles. The release was done in partnership with the Oracabessa Bay Sea Turtle Project.

Around 25,000 critically endangered hawksbill turtles will be released this year, and 1 in 20 are expected to survive to maturity (usually the odds are 1/1000).  This is due to monitoring the sand to protect against poachers, and to releasing them during the day.  The latter factor ensures the babies are at less risk from natural predators and that they have more strength for the crawl to the water and swim to catch the sea currents.

It was an amazing experience, and since the breeding season is relatively long, I hope to be able to take The Historian along next time!

Posted by Hihankara at 7:56 PM No comments:

It has been a few months since I joined the Foreign Service, time for an update!

A-100 is six weeks long, and I had 97 classmates.  We had classes in management, State organization, interdepartmental relationships, all the good (sometimes sleepy) stuff you'd expect from a federal agency.

My first two tours of service (of 2 years each) are directed, meaning They tell me where to go.  The Historian and I are able to give some preferences in assignment, though.  My class was given a list of 60+ posts worldwide, some with multiple positions, that we ranked in order of preference.  We also submitted three criteria we wanted taken into consideration (kitties being one!)

The highlight of A-100, therefore, was what is famously known as Flag Day, where we were given our assignments.  It was a day fraught with tension and excitement - a flag was projected on a screen, a name was called, and we were given a flag of our assigned country by Ambassador Ken Merten. Happily my name was called towards the beginning so I could enjoy celebrating with the rest of my classmates as they were given their posts. 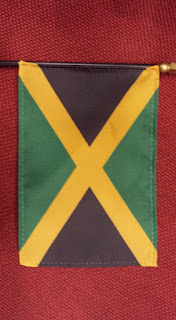 I was assigned one of our top bids - Kingston, Jamaica.  We asked for Jamaica primarily because The Historian was offered a new job in DC right after my own offer came in.  After much discussion, we agreed that for my first tour, he would take the new job while I did my first tour.  Kingston was therefore very appealing for its proximity to DC and because it is an English-speaking post.  This means I will have to have language training after this tour, and that will give Chris nearly three years in his job before he joins me for my next post.

After A-100 concluded, I had a few weeks of specialized training and arrived in Jamaica in late July.  My job here is as a Consular Officer, and I currently interview 100+ applicants/day who are applying for non-immigrant visas to come to the United States.  This is usually tourist visas, but could also be business, student, or exchange visitors.  I've done around 3500 interviews so far. 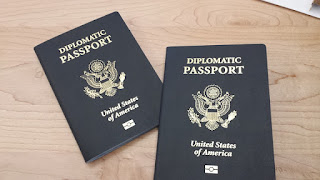 Jamaica is an interesting post - it is a critical crime threat post, and household goods are very expensive (a new ironing board priced out at $65)  This will put me in the first tranche for bidding on my second tour.  Jamaica also has a unique relationship with the US - its proximity means that flights are cheap, and everyone has a family member (or several) who live in the US.  This means that we have an extraordinarily high number of visa applicants - it is not implausible for a poultry farmer who lives on a few hundred dollars a month would make a trip to the US to see family or to go shopping, something that would be out of reach for an equivalent income in nearly every other country.

My housing is nice, and the views are amazing.  There is one beach we can get to from Kingston, by hiring a fishing boat to ferry us to an uninhabited island.  Otherwise the more famous beach cities are 2.5 hours (Ocho Rios) and 4.5 hours (Montego Bay) drive.  I'm looking forward to exploring some of the less touristy beaches.  The embassy also organizes various excursions, including to release endangered sea turtles and an excursion to the Appleton rum distillery.  Household help is also very affordable, and I have an amazing helper who comes two days a week who cleans, cooks great Jamaican food, and does light shopping.

If you are a Facebook friend, you will also know that we had a brush with Hurricane Matthew over the weekend.  One of the best things about the State Dept is that it really is a community (there are fewer diplomats than there are military band members in this country).  It was amazing to watch how everyone pulled together to either support those who evacuated and to ensure the safety of those of us who stayed.

Posted by Hihankara at 6:59 PM No comments:

After rather long hiatus on this blog, I'm picking it back up again.

Its funny how life goes, and how you can play the long game and the next thing you know, everything comes to fruition at once.  I should have been buying lottery tickets.

In less than a week's time, I found out that I won elected office, because no one wanted to run against me in what was an otherwise crowded field.  Four days later, I passed my Oral Assessment to be a Foreign Service Officer with the US Dept of State.

I was surprised by how quickly I was offered an invitation to join an A-100 class (aka diplomatic boot camp), and now I've only two days left at my job of nearly nine years...a week to finish organizing our stuff before the movers come, and then a few more days until we move to DC.

What I've learned so far about this life we'll be moving into:

And finally...it didn't strike me just how much we're putting our lives in the hands of the Foreign Service until about the fourth or fifth person expressed shock that we don't know what our first post will be.  That my training comes first, the assignment second.  That's part of the fun of it for us!

Posted by Hihankara at 7:28 PM No comments: